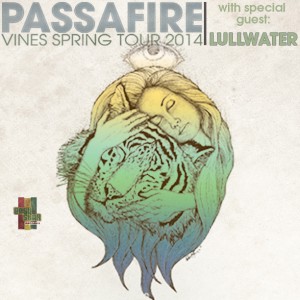 Our new album VINES is out now on Easy Star Records and debuted at #1 on the Billboard Reggae Chart! Check us out on the Vines Spring Tour supporting the new album!

Vines is the band’s debut release for leading reggae label Easy Star Records. Since the 2011
release of their chart-topping (#1 Billboard and iTunes Reggae) album Start From Scratch, the
Savannah, GA-based quartet continues to raise their profile to the top of the exploding U.S. reggae
Much of Vines was recorded just outside of El Paso, TX at the legendary Sonic Ranch Studios,
the largest residential recording studio complex in the world. Acts as diverse as Animal
Collective, Sublime, Gogol Bordello, and Band of Horses have all shared the unique facilities
and atmosphere where the new album was recorded. It was finished in the band’s own home
studio, which allowed for a much more relaxed, off the clock approach to the final sessions.

After the recording was completed, Passafire worked with Paul Leary (of the Butthole Surfers), who
produced their last album, to nail down the final mixes. Leary’s impressive resume includes work
with Sublime, Pepper, Slightly Stoopid, U2, Meat Puppets, and Daniel Johnston, to name a few.
Vines is Passafire’s most ambitious release to date, thanks in large part to the focus of the current
line-up – singer/guitarist Ted Bowne, drummer Nick Kubley, bassist/vocalist Will Kubley and
keyboardist Mike DeGuzman. The results find its makers at a creative peak combined with a
comfort level on stage and in the studio that Passafire has never achieved before. Early critical
praise of Vines is already coming in, with The Pier enthusiastically stating, “…the tracks have a
maturity and depth to them, traits gained only by working out material together on the road.